Both the incidence and recognition of respiratory disease in horses has increased over the past two decades, and recent research has indicated the need to pay close attention to the environment, to reduce the level of exposure to the disease causing agents. If the horse is suffering from a viral or bacterial infection of the respiratory tract, or an allergic response to the presence of inhaled fungal or actinomycete spores or noxious gases such as ammonia, this can cause inflammation of the small airways, increased mucus production and bronchiospasm, and the condition can be exacerbated by a ‘dusty’ environment. Indeed the connection between respiratory tract infection and allergic respiratory disease is well known in human medicine, and it appears that horses are more sensitive to respiratory allergens (agents causing an allergic response) after infections of the respiratory tract, since the damage to the airways caused by the infection allows easier access of airborne allergens to the sensitive tissues.Thus, not all viral or bacterial infections will result in the horse becoming sensitized, but recovery time after respiratory infection is prolonged in the presence of environmental contaminants. Once a horse or pony becomes sensitized – and this can occur over a period of years of being exposed to environmental pollutants – it will remain so for life, whether that sensitization was due to exposure to a severe challenge or as a sequel to respiratory infection.

The major respiratory allergens include:

The ContaminantsFungal Spores Hay is probably the single most common source of fungal spores, most commonly caused by baling at too high a moisture content. A horse eating mouldy hay or stabled on a contaminated bed may inhale millions of spores with every breath. Perhaps more importantly, significant levels of fungal contamination may be seen in hay which looks and smells ‘clean’. Thus the challenge to the respiratory system probably exists to a greater or lesser degree with all horses that are still fed hay.Even when hay is soaked, the horse still ingests the spores, along with any toxins which may be present and as the wet hay falls to the floor and dries, the spores will again become airborne and inhaled by the horse, and will contaminate the bedding. Other feedstuffs, such as poorly stored or dried oats, can also be a source of fungal contaminants.

Even the cleanest of straw will contain more fungal spores than alternative beddings such as wood shavings, paper or synthetic beddings. Deep litter should be avoided, as significant moulding can occur, in addition to the build-up of noxious gases, (ammonia) and the larvae of gastrointestinal parasites.Typical photomicrograph of contaminated hay, straw or plant-based bedding. There are large numbers of small respirable fungal sporesAmmonia
Ammonia released from deep litter or poorly managed bedding, where damp patches are left, can seriously damage the horse’s airways and reduce the efficiency with which the horse copes with other respiratory allergens such as fungal spores.Reducing the Respiratory Challenge

Our HorseHage range comes in four different varieties offering different energy values, allowing you to choose the variety most suitable for your horse.

From high quality chaffs to complete feeds, our Mollichaff range offers a number of different options individually tailoring the feed to your horses needs. 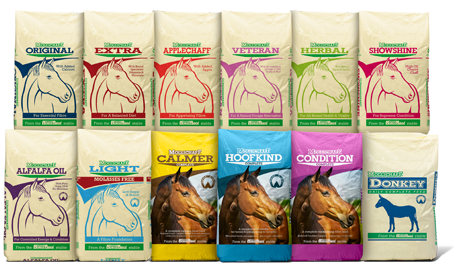