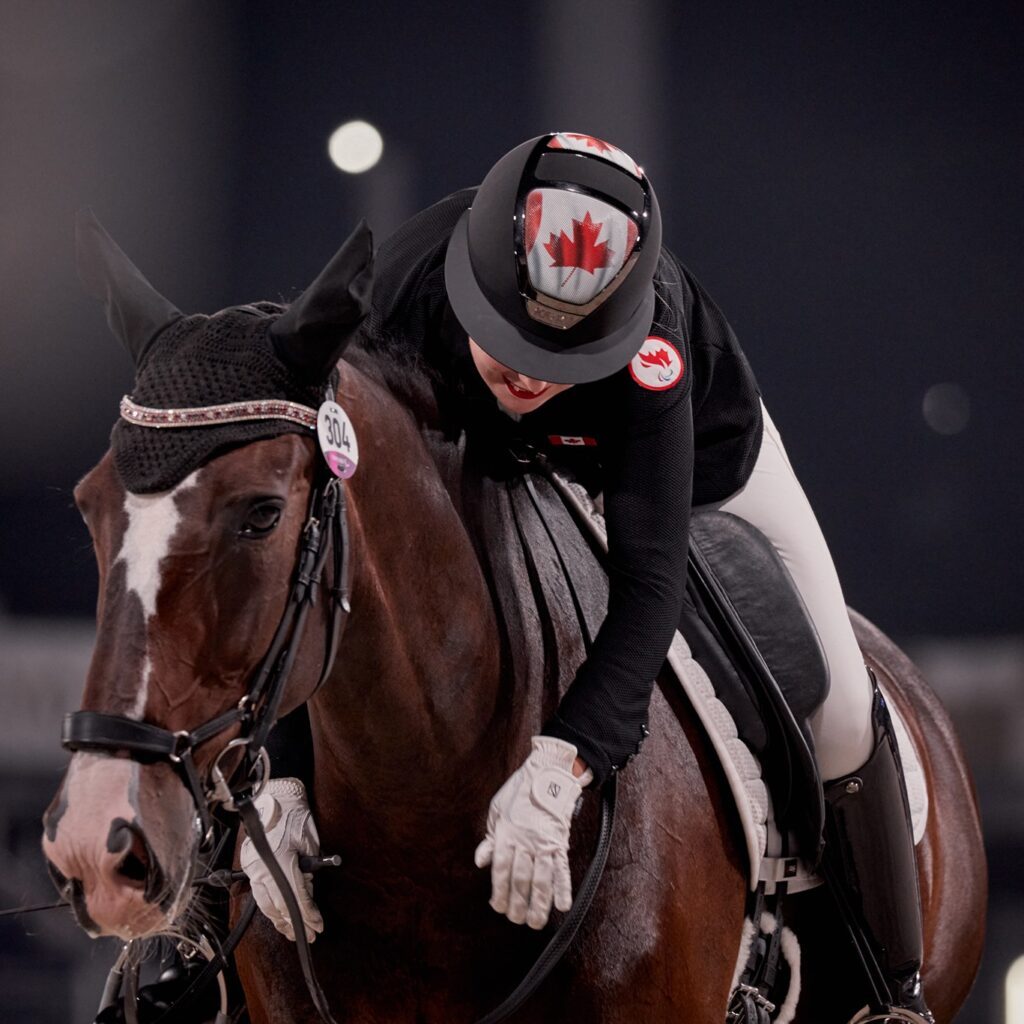 HorseHage-sponsored and South Lincolnshire-based para-equestrian rider, Bert Sheffield, who rides for Canada, tells us about her time competing at the Tokyo 2020 Paralympic games.

“The Paralympic Games are always an occasion like no other and the Tokyo 2020 Games proved to be even more extraordinary than the others before her or anyone of us so deeply involved could have imagined. A triumph in these uncertain and difficult times.

“Although I may not have medalled, I had a fantastic Games experience and even topped the previous Canadian Paralympic records with a personal best score for my test in the team competition to help Canada finish 10th overall. And best of all, I got to live all this with my wonderful heart-horse Fairuza (stable name – Wonky)

“The preparations for Tokyo have been like nothing I have done before. The ever changing nature of the Covid situation in the UK and the EU brought extra complications. It was decided that to be sure that we could get into the pre-Tokyo export quarantine held at the Aachen CHIO showground, Germany, I needed to head into Germany earlier, when the doors were definitely open! Fortunately, we were able to stay at the very accommodating Volker Eubel Dressage stables, home of the Singaporean team.

“HorseHage Germany generously supplied Wonky with High Fibre HorseHage for her time there and during the quarantine. It is so important to keep continuity of high quality forage especially at a time when the horse will be facing other changes in routine and environment.

“The pre export quarantine was originally for the horses; to prevent any nasty diseases making their way into Japan. But with the Equine Herpes Virus outbreak earlier in the year as well as the human Covid pandemic this time of isolation and monitoring took on a whole new significance. Each team had their own barn bubble.

“Our team’s horses also got to know each other. Wonky took on the role of “Head Girl” in the group.  Although it was her first Games she looked out for her gang of 3 boys. A role she would reprise again in Tokyo as Chief Friendly Horse. She has such a sensible head on her shoulders.

“The horses flew from Belgium to Tokyo with our team veterinarian, Dr Alan Manning, looking after them. Due to a quirk of diplomacy (Putin loves horses) the horse flight was allowed to go through Russian airspace, shaving many hours off their journey. They all arrived fit and healthy.

“There was little time to acclimatise once we arrived but we had mitigating strategies in place. Tokyo in August is HOT! Hot and damp like soup. The whole village and venue complex was totally designed to suit the conditions – air conditioning everywhere that could possibly be air conditioned including all the stables. And the horses had a curfew in the middle of the day; no horse was allowed out of their stable between 11am-3pm.

“We mostly worked the horses late afternoon and in the evening which weirdly enough fitted with the time we would have worked them in the morning in Europe when you accounted for the time difference. I think this helped with the jetlag. While we worked them an army of veterinarians and medics armed with thermography cameras monitored us, sending any horse that was getting a bit too warm into one of the cooling down tents where there were misting fans and huge tanks of iced water for washing down. Wonky loved the misting fans, she never overheated but she got to enjoy them before and after her “friendly horse” duties and after work. More about her other job later.

“The most stressful day for me is always the day of the horse inspection; when the horses are presented to the judges and head veterinarian to make sure they are fit to compete. So much rides on your horse looking beautiful, standing nicely and then jogging smoothly up and down in front of the grandstand. One misstep or knock and you could be “spun” and everything is over. Rich Neale, my groom, presented Wonky immaculately. They looked a picture! Wonky and the rest of the team horses were accepted straight through.

“Wonky has another very important job that she excels at as well as the dressage piece. She is much in demand as a “friendly horse”. This is a role peculiar to Para Dressage. In the more disabled grades 1-3, riders can choose to have a companion horse stand by the competition arena on the field of play to give their horse confidence. Wonky is in high demand as a friendly horse because she is trusted to literally fall asleep in that high octane atmosphere. She was Lee Pearson’s friendly horse of choice for his horse Breezer’s first gold medal winning test of the Games. Her popularity means we have to limit the number of tests she can snooze through. It was so sweet that the commentators on the TV were even acknowledging her!

“Then it was onto my part, two days later! The individual test was first, a competition with it’s own set of medals and the qualifier (top 8 riders) for the freestyle competition on the final day. Clive, my personal coach and the team’s technical advisor, and I discussed my orders. I was to ride a steady, confidence-giving, clean test; to create something to build upon rather than going for broke. We achieved our performance goals but alas scores were extremely tight. I finished 12th, less than 0.3% behind the 8th place that would have got me into the freestyle finale. However, my score was good enough to get me selected to represent Canada in the team part of the competition.

“Buoyed up by the clean, confident test we had achieved the day before, it was decided that I could turn up the volume so to speak. Wonky and I went all-in. Riding to my favourite powerful music of Depeche Mode (arranged by Avery Maude Dressage) we produced a performance to match to swaggering beat. And the judges appreciated it. We finished 7th with 72%, breaking the previous Canadian Paralympic record score. And finishing the highest scoring Canadian in the team competition.

“Then all we had left to do was support Lauren Barwick for her ride in the freestyle on the final equestrian day, cue lots of flag waving! And pack everything up ready to fly home.

“It is easy to wish I had had the confidence to ride a “big” test in the first round but hey we now know we can do it and judges love her expressiveness. These Games were very much part of a learning-growth journey rather than a finished end project. Wonky is 12 so she hopefully has many years competing ahead of her. Before we left Tokyo, Clive and I were already working out our plans going forward towards the World Championships in Denmark next August!

“My sponsors and supporters like HorseHage have a huge role in making these wonderful adventures possible. The peace of mind that comes with knowing exactly what my horse is eating, that it is consistently and dependably high quality is very important to me as Wonky is not just a competition horse but a member of my family. I want nothing but the best for my hearthorse.”