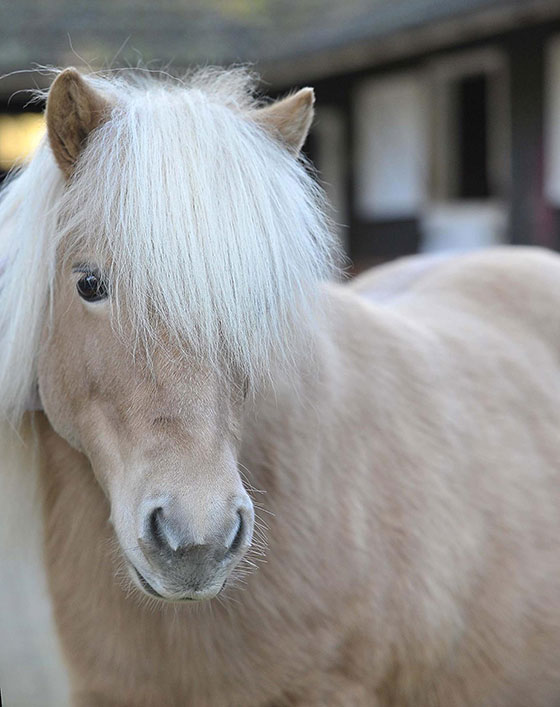 In 2013, Essex-based horse lover, Ellie Ingram, was contacted by a friend who told her she had heard about 25 Shetland ponies on their way to slaughter as they were deemed as ‘wastage’. The friend agreed to take two of the ponies and Ellie agreed to be responsible for their day-to-day care. They named the pair Pearl and Peaches.

Ellie’s friend then moved away to Wales so they decided she would take Peaches with her as a companion for her horse and Ellie agreed to keep Pearl. Ellie had recently lost her 26-year-old son in tragic circumstances and spent a lot of time helping her friend with the horses as it was a real help to her whilst she was grieving, and so Pearl became her life-saver, giving her a reason to go on. Ellie describes her as her very own ‘My Little Pony’, standing at just nine hands high, with her passport name of Banoffee reflecting her beautiful colouring of cream and white Palomino with a flaxen mane and tail.

When they first arrived, Pearl wouldn’t even go into a stable and so had to be kept in the manège. She would compete for food and hay and always had her ears back. The little Shetland had obviously been neglected for some time and had a resistant worm load and many scabs on her skin as well as being overweight.  Her hooves were cracked and splitting and she had lice. Ellie tried many different feeds which were suitable for horses and ponies prone to laminitis but had to keep adding linseed meal and supplements for Pearl’s hoof condition.

Shetland ponies are the Labradors of the horse world and love their feed, grass and forage and Pearl was no different. Ellie was soaking her hay every day to keep her satisfied and trickle-feeding. She also used a feeding muzzle when Pearl was turned out, to slow down her grass intake. Her main problem was sourcing a suitable feed that offered palatability, digestibility and longer satisfaction without high levels of sugar and starch but she didn’t want to reduce her energy levels.

In January this year, Ellie heard about Mollichaff HoofKind Complete – a complete fibre-based feed which is low in starch and sugar and does not contain any cereals. It provides a low level but high quality protein with restricted calories and is ideal for horses and ponies prone to laminitis. Because it’s high in fibre, it takes Pearl longer to chew and so she is more satisfied. Mollichaff HoofKind Complete is exactly that – ‘complete’. It contains a broad spectrum vitamin and mineral supplement and when fed at the recommended levels, it provides all Pearl’s dietary requirements and so can be used as the sole concentrate feed alongside plenty of good quality forage.

Said Ellie: “I have noticed that since Pearl has been on Mollichaff HoofKind Complete she is more satisfied with her feed and seems to enjoy the chewing of it, rather than bolting it down. I no longer need to add any supplements and so it saves time and I am confident that Pearl is getting everything she needs for her energy without the complication of too much sugar and starch, which helps with preventing her becoming overweight and prone to laminitis.”

“She is now a very different pony to the one we rescued. Her hooves, mane and tail are in tip-top condition and her temperament is so calm. She has no stereotypies, comes to call and can be handled, groomed and plaited up by a child in safety. She is currently ridden by my eight-year-old grand-daughter and has been trained to harness as well as doing a little jumping, although as Pearl is now fifteen, this isn’t a regular activity. I hope she can go on to be a great first pony to another child as she’s now in great health and has excellent manners.”

“I would not hesitate to recommend Mollichaff HoofKind Complete as I believe it has made a real difference to Pearl and has been well-researched nutritionally to provide the perfect feed for ponies that are good doers and prone to laminitis.”