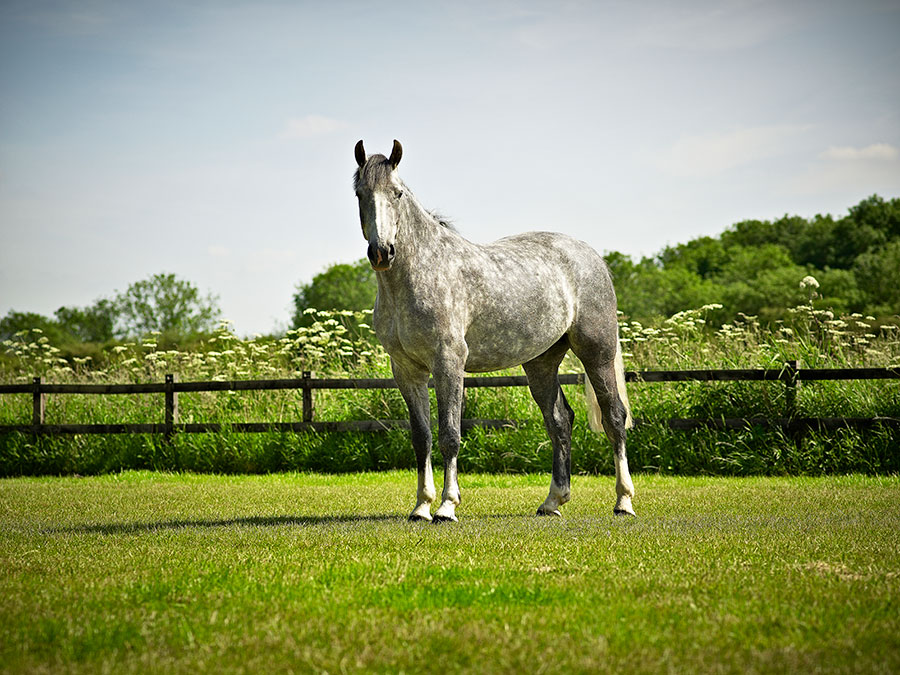 Forage is an extremely important part of the diet of all horses and ponies and has three functions:

FRESH FORAGE may be provided as fresh grass from the pasture (avoid feeding grass mowings or clippings as they may cause major digestive disturbances and can cause serious gas or impaction colic.)

PRESERVED FORAGE may be provided, either in long fibre form as hay, haylage (semi-wilted, fermented grass in bags) or in short chopped fibre form commonly known as chaff.

Long Fibre
HAY is the most traditional method of preserving grass for horses. Meadow hay is made from established ‘old’ or ‘permanent’ pasture, which has developed a wide variety of different grasses and other species. Seed hay is cut from fields of especially sown grasses or ‘leys’. Seed hay leys are usually a maximum of three years old and normally contain only one or two grass species.

Threshed or Thrashed Hay
When grass is grown to produce grass seed, the threshing or thrashing process removes the seeds and the stalks are left to dry. These stalks and the limited amount of leafy material are baled as threshed or thrashed hay. The nutrient levels in this type of hay are often rather low as the grass is usually quite mature and stalky when the seeds are ready for threshing.

Mould Contamination in Hay
Recent surveys suggest that up to 80% of hay made in the British Isles contain significant amounts of mould contamination usually caused by too much moisture when baling. Dusty and mouldy hay is probably the single greatest cause of allergic respiratory disease in horses and it aggravates the symptoms of infectious respiratory disease. Thus many people are looking for alternative sources of forage.

Grasses and Plants of British Hay

Soaking Hay
Many people soak hay, hoping the spores will be washed out or ‘stick to’ the plant material and be swallowed rather than inhaled. However, as the hay dries the spores again become airborne and are inhaled. In addition research has shown that there are significant nutrient losses when hay is soaked.

Semi-wilted, Bagged Forage
A method of preserving grass which overcomes all the problems of dust and mould in hay is semi-wilted forage.The leading brand is HorseHage which is grown and produced specifically for feeding to horses. It is made from selected quality grass (seed leys) cut and turned just like hay but, instead of being allowed to dry completely on the field, it is baled when the grass has wilted and the moisture content is between 35 and 45 per cent (55-65% dry matter). This takes around 24 hours in good drying weather.The bales are then compressed to half their original size and heat sealed into tough double-skinned plastic bags. No artificial preservatives are added, and natural fermentation inside the bag prevents the development of fungal spores and preserves the grass.

Once the bags have been sealed to exclude air, naturally present bacteria and yeast start to break down the sugars – a process called fermentation – in order to preserve the grass and retain maximum nutrient levels.

The aim of the HorseHage manufacturing process is to encourage a mild lactic fermentation brought about by the presence of the beneficial micro-organisms such as lactobacilli. This reduces the pH, that is, naturally produces a slightly acid environment sufficient to prevent the activity of harmful organisms, and it is this fermentation which gives HorseHage its characteristic attractive smell.

The problems of nutrient loss from fresh grass during traditional hay-making, and the unsuitability of most silage for horses, are well documented. Due to the special method of preservation, HorseHage retains up to 90% of the feeding value of fresh pasture.

Unlike some semi-wilted forage or silage, no acid additives are used in the production of HorseHage – mould growth is prevented by the method of production and hence is naturally inhibited.
Semi-wilted bagged forage is so effective at preventing allergic respiratory disease that many owners feed it for this reason alone. In this way they avoid respiratory problems which might otherwise prevent a horse from reaching a required level of fitness, which in turn would badly affect its performance. Recent research has shown that dust-free bagged forage usually provides a higher level of digestible fibre than most hay samples and thus bagged forage can provide a greater proportion of the horse’s energy requirements. This allows a reduction in the energy needed from concentrate feeds and helps to prevent starch overload disorders. Furthermore, bagged forage retains the naturally present B complex and other vitamins which are usually lost within weeks of making and storing conventional hay due to exposure to sunlight and oxygen. The B complex vitamins are important in:

Other advantages are that bagged forage, such as HorseHage, is supplied in several types, i.e. Ryegrass, High Fibre, Timothy and Lucerne (Alfalfa) with nutrient values to suit different horses. Most importantly, unlike hay, it provides a consistent nutrient value. It is therefore much easier to assess how much concentrate feed is needed to provide the required energy and a balanced diet.

Big Bale Haylage
Big Bale Haylage is made in a similar way to semi-wilted bagged forage, but in bales weighing up to half a tonne, and rather than being bagged, the bales are wrapped in several layers of plastic. Due to their size the bales are difficult to handle and impractical for most horse owners, as once opened the bale needs to be consumed in 3-5 days. They also tend to be higher in moisture and more difficult to compress, leading to poor fermentation.

Silage
Clamp silage is made by cutting grass and usually taking it off the field immediately while still ‘wet’. The grass is put into a specially built pit or clamp and compressed by rolling – usually with a tractor. It is then covered in plastic, weighed down with old tyres. Additives or chemicals may be used to encourage a rapid fermentation to preserve or ‘pickle’ the grass. Silage may also be made in large round bales. Generally silage is not suitable for feeding to horses, since the moisture level is usually too high, with a low pH, a low fibre and high protein level.

General Points about Bagged Forages
Bagged forage especially for horses, big bale haylage and silage all depend for preservation upon successful fermentation in the controlled environment of their plastic packaging. However when over 50% moisture is present (see the chart below) the fermentation cannot be relied upon to produce suitable forage for horses.

At best it may result in very acidic forage with high ammonia levels, which is unpalatable and has potentially undesirable metabolic effects. At worst it may allow the proliferation of undesirable micro-organisms, i.e. the clostridial bacteria which can cause the usually fatal disease, botulism.

Short Chop Fibre
Short fibre forage can be used as a hay replacer but, because it takes only a short time to eat, it is more often used to bulk out concentrate feeds.

Molassed Chaff
Good quality molassed chaff is made from hay and/or straw which is chopped to a short length, dust extracted and mixed with molasses to provide a highly palatable feed. It is available with different nutrient values, and a choice of added herbs, minerals and vitamins.

Chopped Dried Alfalfa
A more recent product is chopped dried alfalfa, also available with added oat straw to give higher fibre. Both kinds are mixed with molasses to increase palatability and to control the dust. Once cut, the alfalfa is placed into a drum drier where a temperature of 800 degrees celcius quickly reduces the moisture content from around 75 to 10 per cent. This rapid high temperature drying retains nearly all the original feed value of the crop. Chopped dried alfalfa has a higher nutrient value than molassed chaff, and with pure alfalfa hard feed quantities can often be reduced.

Hydroponic Forage
Another alternative to hay is hydroponic forage, which is the fresh shoots of germinated barley seeds grown in a controlled environment and fed at around five days growth. As with vacuum cleaned hay it involves the purchase of special equipment and, if not properly maintained, there is a risk of mould contamination. As fibre levels of hydroponic forage are very low, in practice it is generally regarded only as a supplement to the diet.

Alfalfa Hay
Yet a further alternative to traditional hay is alfalfa hay, also called lucerne, which is imported to this country mainly from America. Alfalfa is a legume – a tall green plant with a purple flower that is made in the same way as hay, but provides a greater source of nutrition. At present alfalfa hay is available in only limited supplies and is very expensive.