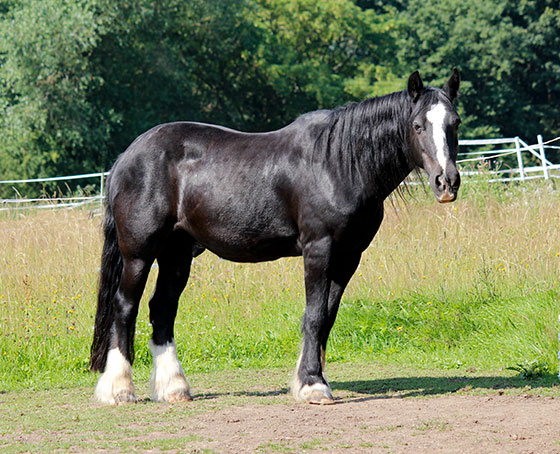 Sam was a much loved and adored pony who was welcomed into the Walker family over 11 years ago. Standing at 14hh, this 22-year-old black Dales x Cob was the sweetest natured pony you could meet and charmed everyone who met him by performing his tricks in turn for receiving treats (low sugar ones, of course!).

Said Sam’s owner, Sonja: “He loved to show his smile, flashing his moustache in the hope for an additional treat!”

“Sam and I were a team, supporting each other through the difficult times. Horses do not ask for much – they just want you to show them kindness, love and care for them and show mutual respect and that is what Sam and I had for each other and it was evident for everyone to see.”

Although Sam had never had laminitis, he was the type of pony who could be prone to it, so when Sonja first got him she took advice from a qualified equine nutritionist about what was the best feed for him and how to keep him at the correct weight, thus minimising the risk as far as was reasonably possible. He was a typical cob – a good doer who loved his food and would hoover up all the grass given half the chance! He was on restricted grazing with an electric fence which was extended by a small amount every couple of days. If there was sunshine and rain, then the paddock was reduced to allow for the additional growth spurt of grass. Due to Sam having restricted grazing, Sonja supplemented his diet with Timothy HorseHage, chaff and a low sugar/high fibre beet plus a good quality vitamin and mineral supplement.

Sonja has used HorseHage for many years and was impressed with its excellent quality and any questions she had about it were answered by knowledgeable and friendly staff at her supplier.

For the first three years Sam was kept at a livery yard and Sonja bought everything in for him as the haylage provided by the yard was not suitable for his needs. Many yards provide regular ryegrass haylage which is simply not suitable for ponies prone to laminitis, a case of one size fits all. Sam was then moved home for his last eight and a half years with Sonja.

Through her research she knew that as horses get older their chances of being diagnosed with problems increased, so Sam’s diet was strictly controlled and he maintained his correct weight well, with Sonja using a weigh tape on a regular basis. However, six months after having colic surgery he went from being a good doer to being the complete opposite. This meant that he required additional calories from feeds that also needed to be low in sugar and starch. Thanks to advice from her equine nutritionist, Sonja was able to achieve this and often received compliments from Sam’s vet about how well he looked and the fact he was never overweight. Ideally horses should be fed little and often and Sonja and her family were in a position to cater for this so between them Sam got fed every
two and a half hours, with either Timothy HorseHage or chaff mixed with the low sugar/high fibre beet. Every morsel he ate was weighed out but Sonja did have a rest at night time!

Sam had his first bout of laminitis in June 2016, but it was low grade and he recovered within a few days. His grazing became even more restricted but in order to
give him as much freedom in his paddock as possible, a gardener friend of Sonja’s used an industrial strimmer to remove as much grass as possible, leaving only bare ground. This idea worked wonders although it was incredibly time consuming, it allowed Sam to have a much larger paddock.

His diet was high fibre and low in sugar and starch which is so important when dealing with a pony that is prone to laminitis.

Despite him being on a diet suitable for a pony that could be prone to laminitis, his nutritionist re-evaluated his diet to reduce the sugar and starch levels even further. The only part of his diet to remain untouched was his Timothy HorseHage, of which Sam relished every mouthful.

Sonja chose Timothy HorseHage as she was advised that in terms of its analysis, it is the most stable in terms of sugar and starch levels out of any of the forages. Having analysed many batches of hay she found some of the sugar levels to be very high. Although owners are advised to soak hay to reduce the sugar levels, there is a lot of conflicting advice out there as to how long you are meant to soak for and at what temperature. With Timothy HorseHage Sonja got excellent quality and it was easy to use, plus Sam thoroughly enjoyed it. Timothy HorseHage is made from timothy grass which has a different ‘nose’ to ryegrass and is extremely palatable to horses and ponies.

Sonja wanted to tell Sam’s story to help others who may have ponies that are prone to laminitis.

Said Sonja: “I can’t stress the importance of taking expert advice from a qualified equine nutritionist. I have worked with the same one since I got Sam and I could not have managed without her help, advice and support.”