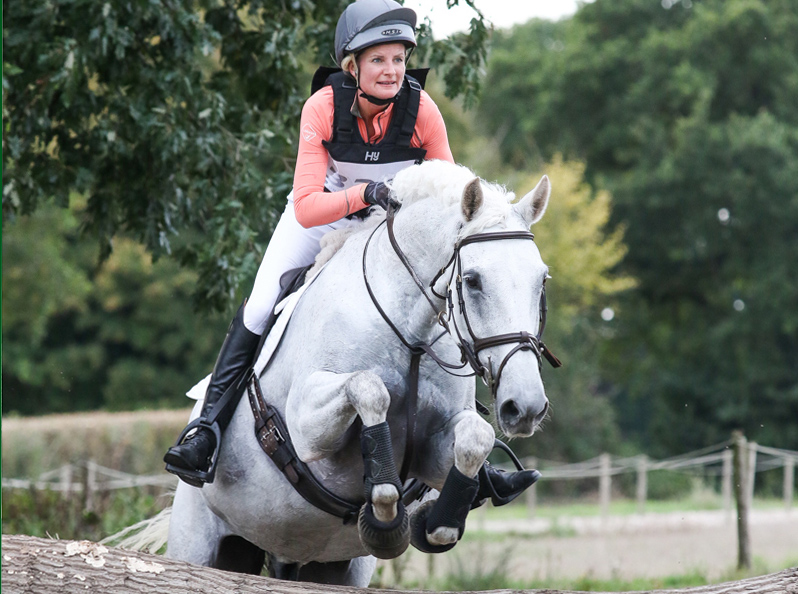 London-based interior designer and part-time potter, Victoria Tar, has recently gained a real confidence boost with her Irish Sports horse, Captain Corlea (or Casper, as he is known at home).

She purchased the 14-year-old grey gelding just over six months ago following a six month loan to make sure they clicked and that she was able to undertake the pressures of owning a horse again after a 20 year break.

Victoria had been looking for a horse to help her regain her confidence jumping again after she had lost her nerve but it wasn’t an instant connection between her and Casper; it was only after their first lesson that the pair began to work in harmony. Casper could be a bit spooky and also got quite stressed when travelling but as soon as Victoria got him home, she knew he wouldn’t be going back and was determined to make the partnership work.

She started off with lots of lessons and small jumps, increasing things gradually. Casper had formerly been a show-jumper and so knew the ropes and, although it was hard work, Victoria’s confidence slowly started to return.

Casper is turned out during the night in the summer and is stabled during the day.  He enjoys High Fibre HorseHage as his forage all year round and is also fed on Mollichaff Calmer Complete as his spooking became worse when he was on a higher energy feed. This also helped to reduce his stress when travelling.

Mollichaff Calmer Complete is a fibre-based complete feed which is low in sugar and starch, providing limited controlled energy from high quality, digestible fibre and oil-based ingredients, making it an excellent feed for horses and ponies that are nervous or easily excited. It also contains a carefully formulated combination of camomile, lemon balm and mint. It can be used as the sole concentrate feed when fed at the recommended levels as it contains a broad spectrum vitamin and mineral supplement.

A return to eventing had always been the appeal to Victoria and she entered her first BE80 event last year, and to her surprise, finished second place. She went on to win her final event of the 2019 season.

Then the COVID-19 pandemic struck and competitions were put on hold for a large part of 2020 which meant in total a break of nine months from competing for Victoria and Casper. She worked hard to build up her confidence again with some lessons and attended an adult riding camp. Once restrictions were relaxed and competitions were able to take place again, she decided it was time to step up a level and recently entered her first 90 cm show jumping competition which was held at Bicton and to her delight, they came 3rd in the class. They followed this with a 2nd place back eventing in the BE80 at Pontispool with their best ever dressage score of 27.3.

Said a delighted Victoria: “I love the Mollichaff products.  As well as Mollichaff Calmer Complete I also feed Mollichaff Alfalfa Oil to Casper when he requires a little more energy when competing. His companion, a retired hunter, is fed on Mollichaff HoofKind Complete.”

“The Mollichaff Complete range gives my horses all the benefits they need without complicated feeding programmes and it is a very cost-effective and simple way of feeding hard feed and I know they are getting plenty of fibre in their diets. Along with careful exercise, Mollichaff and High Fibre Horsehage have helped Casper gain the top-line which he had lost due to being turned away from an injury, and he is now in great condition and knowing that he is much calmer has given my confidence a real boost.”